The evening progressed from phase to phase with the sheer nervous dread of the moment itself.

This is one of my favorite lines in literature.  It is from The Great Gatsby by F. Scott Fitzgerald.  The narrator, Nick, uses it to describe Gatsby's "I'm the man"grand party but the line could have described any upper middle class dinner party in the seventies and eighties.

When I was a young wife and mother and even when I was an older wife and mother, the way we socialized and showed the neighborhood that we had some social grace, money and know how was to have a big stiff, dumb dinner party.   I had three energetic children and had to work very hard when we had people to dinner.  I would prop up the Gourmet Cook Book and make sea food au gratin from scratch with every one of the fourteen damn ingredients  and serve it in a fluted au gratin dish.  We used Dansk serving pieces and flatware to show we had taste.

We had two distinct sets of friends:  smart friends who were quirky, over educated and knew what Ford Maddox Ford did and rich under educated friends who only knew what Henry Ford did. Either way, the evening progressed from phase to phase with the sheer nervous dread of the moment itself.   Wine helped and a lot of wine helped more. 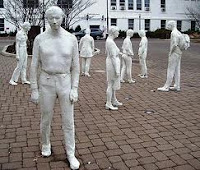 We were invited to dinner parties much like ours and I would save up things to say and try to be a good guest but it didn't matter.  We were like George Segal's white plaster situation figures  that I used to stare at in the Jewish Museum on 92nd and Fifth.
I think of those parties these days because one of my sons loves what he calls our "Friday night sit-arounds."  The sit arounds began several years ago when everyone would arrive at their week-end house on Friday night and come over to my house for dinner. The menu was always spaghetti and meatballs.  I used to tell them that  there was a different dish every night and that if they arrived on Thursday, they could have had filet mignon. In the early years, the guests were good friends and work colleagues mixed with family but recently it's mostly family.  The Friday night sit-arounds are exactly what we all wish for:  camaraderie, reminiscence, humor, familiarity, generosity and stimulation.  Nobody wants to end the evening.

It took a while, but I think now we got it right.
Posted by Consuelo Saah Baehr at 5:52 PM