(It's tabouli time!  All the ingredients are easily available and fresh.  Thought it was a good time to re-post this recipe.) 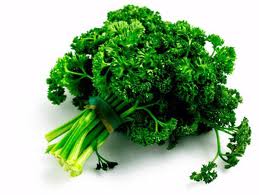 There have been two great Middle Eastern restaurants in my family both in Washington, D.C. and both run by my favorite Uncle Charlie. Everyone in that huge family was a great cook, even the men. I am not talented in that department but I did learn to make better than average hummus, baba ghanoush and tabouli that kicks you know what.

Good tabouli is almost impossible to buy although the gross, soggy almost fermented kind sold in plastic cups is easily had.

Fresh ingredients are important for good tabouli but technique is crucial.

What you will need:
A big bunch of fresh perky curly parsley
4 thin kirby cucumbers
four or five firm plum tomatoes
3/4 cup of medium coarse bulgur wheat.
half a bunch of scallions (optional)

If you’ve seen recipes on the internet, a word of caution.
Does my list include mint? NO! So don’t put mint in it. Ever!
Does this recipe talk about regular onions? NO. So don’t put regular onions in it.
I’ve even seen soy sauce in an internet recipe. This would destroy the tabouli; it’s the opposite of the crisp, tangy, chewy, mélange that we are trying to achieve. My Aunt Mary (the best cook in the world) who would feed anyone who wandered into her house, would be disappointed.

The technique needed with all of the vegetables is to dice them by hand into infinitesimally small pieces. You can’t use machines for this because you will get watery mush instead of recognizable tiny cubes. The parsley is the only ingredient that can be processed in a machine and the only machine that has worked to my satisfaction is the Oskar. Unfortunately, they don’t make the Oskar anymore, possibly because it is a great little workhorse. Whenever something is good, they stop making it. St. Ives stopped making cucumber elastin. (it really tightened your skin), Kiehl’s stopped making their great A and D cream and Sunbeam stopped making the Oskar. My friend Naomi wrote a prize-winning poem about this. It’s called “The Item You Ordered Is No Longer Being Produced.” It’s one of my favorite poems.

The secret at the core of great tabouli is to have all of the ingredients as fresh as possible and more important as dry as possible. If the parsley has been washed put it through a spinner before chopping. For the tomatoes, scoop out the watery part. I choose Kirby cucumbers because their seeds are tiny and their cores have less gelatinous flesh. Remember, we are going for dry.

Place the bulgur wheat in a bowl and cover with tap water. Let stand for about an hour, drain the water. Take small portions of the wheat into the palm of your hand and squeeze the remaining water out then place the wheat in a bowl. Do this until all of the wheat has been “wrung” out. Add the minced parsley, the cubed tomatoes and cucumbers and (optional) add a few stalks of minced scallions (use both the bulb and the green) Mix gently.

The wheat will continue to expand siphoning off any liquid from the vegetables. Because the tabouli is dry, you can store part of it in an airtight plastic container for up to four days.

The dressing: Do not be tempted to put anything but lemon, olive oil and salt in your dressing. The reason we wrung out that wheat and dried the vegetables was so they could soak up the lemon and oil and salt which creates an incredibly fresh tangy taste. The wheat especially will continue to expand getting fatter with the lemon and oil. The vegetables will also rehydrate and glisten with the dressing.

This tabouli is addictively good but it is also good for you. If you pair it with a few home made grape leaves or a sandwich of baba ghanoush in fresh hot artisan pita bread Yum.
**I’ve seen recipes that call for putting fine bulgur and soaking in boiling water. You want medium coarse so it soaks up more dressing. If you use boiling water, the wheat will expand too much and again, won’t siphon off some of the moisture of the veggies and the dressing.

I hope you like this.
Posted by Consuelo Saah Baehr at 8:59 AM