The repurposed writer: William Barr, you had me at jejune.

The repurposed writer: William Barr, you had me at jejune.: Here’s the quote: “It's unusual to have opposition research like that one that on its face ...
Posted by Consuelo Saah Baehr at 7:12 AM No comments:

William Barr, you had me at jejune.

Here’s the quote: “It's unusual to have opposition research like that one that on its face had a number of clear mistakes and jejune analysis and to use that to conduct counterintelligence.”

The only thing I heard was “jejune.”  Whaaaat? A government person?

Kudos, AG for obvious familiarity and love of language.  Your delivery was insouciant.  You slipped it in there without hesitation or stumble.

Jejune isn’t easy to say.  I’ve only seen it written.  It isn’t French for I am June.  It means naïve, artless, childlike, unsophisticated. It can also mean boring, dreary, insipid, dull, tedious.

Mr. Attorney General, talk some more.  What other words do you know?

Posted by Consuelo Saah Baehr at 7:09 AM No comments:

Compression or how to get a restorative hug without touching another person.


When you velcro Fido's torso with a super snug vest called the Thunder Shirt, he doesn't skid around your good walnut floors like an Olympic skater, barking and chasing his tail every time the doorbell rings. He lies in his puffy bed, eyes closed, thinking his dog thoughts:  lick, eat, fetch, sniff, nap. Someone sitting around (like I often do) had a thought.  Fido solved a big life problem.  I could use that.  Could it be?  Can we keep it together by pressing seriously against ourselves just short of asphyxiation?
I remembered something.  The horrid dentist visit was suddenly okay when the nurse threw the lead apron over me as a shield from the x-rays.  That filthy heavy piece of plastic sucked the anxiety out of me. Nothing was going to fall apart - not my limbs, not my head, not my present or future. I was held in place by a benevolent force. My crazy thoughts were still there but they were pinned down. I liked it. Hey, do that some more, nursie.

The most popular compression item on the market is the weighted blanket.  It alleviates anxiety, insomnia, restlessness. Most ads mention the hugging feel as the favorite benefit of throwing a thirty-pound shroud over your body. Why not just stick with human hugging? It's free. And it's everywhere.  We have a hugging epidemic. Even men hug now. They were exempt but they had to try it. Men hug sideways. Around 2016 however, we grew tired of other people. We grew tired of interacting. Tired of talking and definitely tired of listening.  We now prefer to be alone with our devices and be hugged by the blanket.


What’s it like to sleep under a weighted blanket? If the 600 thread count pima cotton sheet is like a whisper on your legs, the 25 lb. weighted blanket is like Ethel Merman belting out Everything’s Coming Up Roses without a mic.  If you want to move your legs, you willfully drag them.


You might want to gift your anxious friend or a relative whose narrative is off-track with a compression item.  Here are some suggestions.


The Calm Company makes weighted blankets in 15, 20 or 25 lb. weight.  The 25Ib. blanket is always sold out. Because, you know - heavier. Honey, can you get the crow bar and lift this boulder off of me so I can go to work. The reviews all say pretty much the same thing.  I fall asleep faster and I sleep better.  I bought it for my dad who was struggling with anxiety.


At ETHOHOME they call it the Gravis Blanket. The gravis blanket holds you down and might give you gravitas. You can become a pundit and get a hug. There are many brands of weighted blankets, but the principles are the same: choose a weight, a fabric, a color, and a fill (sand or beads are mentioned.)


WikiHow has instructions on making your own weighted blanket. I would make one, but the first step is going to a craft store for beads.  I could go to the beach or the driveway and pick up pebbles. I also have to drag out my old sewing machine. To begin, you sew several vertical tunnels through two pieces of fabric, fill with a portion of pebbles and then sew horizontally every few inches, creating closed squares. This technique is called "baffling" Baffling prevents the stones from drifting to one place. You know what else is baffling? Crafting. 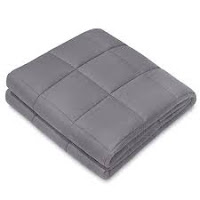 You can buy compression clothing including Bomba socks that have a ribbed swath that compresses the instep.


In researching this post, I read reviews men leave on the compression athletic wear pages on Amazon.  Compression wear is used for faster recovery after gross (tough) exertion. It takes a long time to put on compression clothes, especially the tights. You have to stretch and pull to get the item up on your body. In the reviews, men talk candidly about the size of their bottoms and which brands give them the space they need.  Here's one gent that went that extra mile in reviewing his Tesla compression tights.


The good: The XL were tight (as a good compression layer should be) so the sizing makes sense to me. The bad: this is the only layer I own that doesn't have a wiener hole. Which isn't necessarily a problem if you pull your pants down to whizz in the woods. Personally, I like shooting through the wiener hole myself so it can get uncomfortable when you have say five layers on and you try to shoot through four wiener holes, but you have to pull just this layer down. It can be done but it's just not the same.

* Faith Popcorn predicted all of this (the stay-at-home, self-sufficient human, twenty years ago in her book Cocoon.

Posted by Consuelo Saah Baehr at 5:36 AM No comments: