This is my new favorite word.  My old favorite was Wait. What?

Whuck says the same thing but with an edge.  Whuck is weary of all the trash that goes down.

Today and all week, for instance, my local Waldbaum's had no Earthbound organic greens.  " I don't know why but they haven't come in," said the greengrocer.  Whuck????

Am I late for the party?  Did you already know about this word?

I hope you like it, too, because undoubtedly it will be used here.

Posted by Consuelo Saah Baehr at 12:23 PM No comments:

(A visitor looked at this post.  I re-read and it seemed better than most so I decided to re-post)
Going, going, gone for One Hundred and Nineteen Million Dollars


Most of us know The Scream as a painting of excruciating desolation. You have to be a learned art connoisseur to appreciate the artistic quality of this painting.  My grandmother, Farida, who suffered transplantation during WWI, would probably not have included it when she packed up the few things to put in her knapsack. 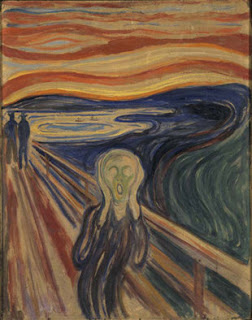 The version of The Scream (there are four) that was in the news recently was a crayon pastel with a blood red sky. They say the figure is a man but it looks more like a woman in a shirtwaist dress reacting to a washing machine that has overflowed and is sending a cascade of suds into the wood floor of the living room.  The painting sold for 119 million dollars last week. If I sound like an ignoramus making fun of this iconic symbol of human anxiety, it is because I am an ignoramus. The artist left this explanation for the painting in his diary:
I was walking along a path with two friends the sun was setting I felt a breath of melancholy. Suddenly the sky turned blood-red I stopped and leant against the railing, deathly tired looking out across flaming clouds that hung like - blood and a sword over the deep blue fjord and town My friends walked on - I stood there trembling with anxiety And I felt a great, infinite scream pass through nature. (1892)
Norway, the artist’s home, has an extensive social welfare system. Norway has a lot of money acquired from their extraction of petroleum in the North Sea. They keep their money for their citizens and don’t dribble it away on wars and foreign aid to countries that hate them.  A compulsory National Pension plan provides citizens with benefits such as universal child support, one-year paid maternity leave, and pensions for old age, disability and rehabilitation. Norway's extensive attention to the medical and financial needs of its people translates into a long average lifespan.  Seems like a happy place to me.

Mensa, Mensa, Mensa
A two year old has been admitted to Mensa.  The toddler with an IQ of 154 can recite the alphabet backward and forward, count to 1,000 and name the planets in the solar system. Memorization seems to be the measure of genius here.  What about original thinking? Has that toddler ever had a unique thought? Can you imagine anything more dreary than going to Mensa meetings where everyone is trying to play extreme smartness. You only hear of Mensa when unlikely candidates are admitted.  If Jessica Simpson was admitted, we would be like “huh?”

Jell-O Redux
I haven’t thought about Jell-O in decades. I was never a big fan of Jell-O (the dessert) and aspics (the savory version of gelatins).  It would take a lot of money to get me to willingly make an aspic. Last week, I was browsing the baking aisle in the supermarket and discovered a shelf full of puddings and gelatins.
The cursing angel of good, said to me “Why the f**k are you so against Jell-O?” To my surprise, the sugar-free version of Jell-O has O calories. What?  I took a box home.  It was so good, I ate the entire portion while it was still only half jelled.