(This is a re-run.  Originally titled "I want to kill the kitchen.")

I read on Yahoo that the home of 2015 probably won’t have a living room. Builders expect the living room to merge with other spaces or vanish completely. I’ve written countless times that the living room is a useless place we’ve been told is necessary. My living room starts at the front door, it’s hard to miss but I hardly use it except as a corridor to the kitchen, the bathroom and the bedroom.
Here’s a recent conversation I had with the living room.
“What are you doing in here? Is the pastor coming over?”
“I don’t have a pastor. I feel I should use you more."
“Why? There’s nothing to do in here. No media. No computer. You don’t even know me that well. You never really look at me.”
“I look at you.”
“You look ahead when you walk through me.”
“Do you think you have any purpose?”
“Years ago they called me ‘the parlor’ and people ‘paid calls’ and sat here and had tea. It was a little phony but everyone was polite. Today everybody goes right to the ‘oink, oink’ kitchen. That hog, has taken over everything. It doesn’t have a door anymore. It’s creeping into the whole house. It is the whole house! Soon the word ‘house’ will die out. You’ll buy a kitchen.”
“How did that happen?”
“Good p.r. The kitchen was sold as a touchy-feely cozy place that you could visit in your pajamas. Ooooh the kitchen inspires confidences. Blah, blah, blah. Everybody was sucked in. Oooh this is my safe place. Is marble cozy? Is Sub-Zero cozy? Is stainless steel cozy? Exactly. The devil wears Bosch.”
“But the kitchen is necessary.”
"Really? Does anyone cook anymore? Uncle Ben makes perfect rice in a bag. Store-made rotisserie chickens are reliably tasty. Salad comes washed and cut up in a container. No waste. No dirty pans.”
“You think we’ve been duped.”
“Like lambs to the slaughter. I want to kill the kitchen. I've made a song about it to the tune of Imagine.
Imagine there’s no kitchen,
It’s easy if you try
No hellish food to tempt us
The fridge has gone bye bye
Imagine all the women
Living slim and free...
Imagine there’s no butter
It isn’t hard to do
Nothing to fry or whisk up
And no pesto too
Imagine all the women
Living life in peace
You may say I’m a dreamer
But I’m not the only one
I hope all fat girls will join me
Let’s kill the kitchen. Bang, bang. Done!

“So living room, I guess this is good bye.”
“What are you going to do with my space?”
“Probably open it up and expand the kitchen.”
“Why did I even bother? Yeah okay goodbye. Whatever.”
Posted by Consuelo Saah Baehr at 6:25 AM 1 comment:

I became lonely when it was about to end 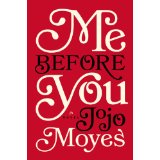 I don’t know what to make of this book. Let’s see if I can deconstruct why I liked it so much.  The set up grabbed me because of its ordinariness: a family with two grown daughters is struggling in a poor economy and one of the daughters, (the one no one has faith in) gets a weird job that will save the others from slipping into poverty.  Oh, and it takes place in a small English village which raises the interest level for American readers by a hundred.

As in life, the likeability factor played a big part in my total interest in the outcome. Did you notice I said “total” interest?  I wanted to get back to my reading and I became lonely when it was about to end.  Yes, lonely.   The major and minor characters were endearing and when unlikely events began to infiltrate and better their lives it was within parameters that were believable and satisfying, not life changing (although life did change as it always does).  The last part of my deconstruct has to do with what we call a “love story” and how we yearn for someone right along with the main character.  I yearned right along with Louisa Clark and that’s as much as one can ask for in a book.

(Will blog again later with my own ramblings.)
Posted by Consuelo Saah Baehr at 4:13 AM No comments:

The N.Y. Times had an Op-Ed piece by tech multi-millionaire Graham Hill who had an awakening:  he once had a fondness for stuff and lived large and now he doesn’t want the stuff and lives small. How small? 420 sq. ft.  On first reading, your head starts singing “Oh happy day. Oh happy day. When Jesus washed. My sins away.”

Mr. Hill heads a firm LifeEdited that designed his tiny apartment as a prototype to coax us into joining him in his newly calibrated life.  The renovation that transformed an honest 420 sq. ft. of lovely undifferentiated space into 8 possible rooms cost around $300,000. The 8 rooms are made possible by a multitude of hidden, stacked, double-duty load of high-tech preciousness including a moveable wall that holds some of the rooms in suspension, a collapsible table that seats 10 ($15,000), a desk in a drawer, drop down bunks for guests and a full-size media room/home theater achieved by moving the magic wall all the way to another wall.
Mr. Hill wants to persuade us to edit the way we live and consume because possessions are the problem not the solution. But instead of torpedoing our old perversions in his prototype, his stupido apartment has glorified our stupido old habits that made us feel empty in the first place. We wanted to get away from our media room. Wasn't that the point?

The master plan of the apartment is to cleverly hide all the stuff we need to live there behind inscrutable cabinets.  Life becomes a freak show of premeditation.  You have to hunt for and unstack the induction burners to cook.  Un-telescope the table to eat. Get your desk out of the wall to work. Push the freaking wall to get to the television.

I like to read at a big table and I like to sort out stuff on a big table and I like to put a small appliance (toaster/toaster oven/electric teapot all on the table or a trolley nearby. I need the table available all the time. The designers should have spent a day with their mothers and watched how they live.    They would then skip the bs moveable wall and the drop down bunk beds and the cleverness.

I could live with a small bed, a table, a big easy chair, a flat bottomed bowl, a cup, a sharp knife, a spoon, two good sweaters, three tunics, a half dozen leggings, a knit hat, two scarves, a down vest, a towel and those 18 washcloths from Wal-Mart that cost 3.95.  For cooking, I would have a deep frying/sautéing pan and a two-quart saucepan for rice, oatmeal, spaghetti, a blender or small chopper for smoothies or soup.  I would LifeEdit my food intake, too.

Many comments were left by other readers of Mr. Hill’s essay. Here are a couple I liked a lot:

“'Not enough' is the soul-grinding, joy-crushing truth for very much of this world's population. We'd do better to tend to that rather than fetishize our ability to more elegantly calibrate our own abundance.”

“I'm 82 and live on and with the barest of necessities, for the less I have, the better I feel. I regularly go through my small house wondering what else I can get rid of. Minimalism is soothing, aesthetically appealing. I sometimes fantasize about living in a cell like a monk - a cot, a table, and a window. “