What the day brings

If someone had told me yesterday I was going to row a boat out of a harbor to pick up a stranded sailor, I would have said “Yeah, I’m also going to harvest the liver of a dead horse to draw out the poison in the wound of a Union soldier.”

My ancestors were desert folk. We seldom did boats. I have never willingly boarded a boat. By six p.m. I had shopped for dinner and even cooked dinner and guess what? No boating. No rowing. At six thirty I went to pick up my eldest at Northwest Harbor where he had successfully sailed the refurbished Suzie Q from the marina to its home mooring. He shouted out: “Could you row the dinghy out?” I looked around to see who else was on the shore. He said, “Just slip the rope up and turn it over.”

After several attempts the rope finally cleared the tie-up pole. “Turn it over and drag it to the water. It’s easier to drag it.” I turned it over and dragged it to the water “Get the oars.” I saw that the oars had little pins and saw that they fit into holes on the side of the boat. I fit them in and felt cautious. Not optimistic. Just cautious. I pushed the boat into the water just enough so that it floated but I could still get in without upsetting everything. I got in and began to row or what I thought was rowing. I was sure I was moving ahead but after a few minutes my boy said: “You are still on shore.” “I haven’t moved?” “No.”

I got out and pushed the boat more into the water and tried to propel it forward. It kept turning around and going back to shore. You know how religious people say that God is everywhere if you only look? Well, this man appeared out of nowhere (God in disguise) and told me I had to “push the water ahead of me, not push it back.” He gave me a giant shove that sent me halfway out to my destination.
I struggled for another few minutes but eventually arrived to the waiting hands of the sailor. When the dinghy was safely tied to the Suzie Q, I said: “Birth order really matters.”
Posted by Consuelo Saah Baehr at 5:27 AM 1 comment: Links to this post

(set-up: This excerpt is from a “personal memoir” titled The Year of Throwing Away)

Who would have thought that throwing away things would bring me the change I was looking for. Who would have thought that giving away some mismatched chairs and an Oskar chopping appliance and throwing away three rusty graters and only keeping one shiny one and three wooden spoons and an egg slicer that was off center and three of the four can openers and four clear glass vases would take away some of the blindness in a sudden and decisive way and show me the lynchpin of my emotional personality and help me put certain traits away forever.

There was a jar of lavender oil that went in the heap and The Welder’s Bible that begins “put on a good pair of goggles,” the Letters of Virginia Woolf (what a strange group those Bloomsbury people). I had to toss in Suzanne Sommers. Altogether four Hefty bags filled with stuff from the closet under the eaves: new crepe-soled shoes, denim shirts, wire hangers. Notebooks with notes on self-improvement. I knew all the ideas by heart. I knew that thoughts are things and whatever you think of most often is what you will manifest. I knew everything backward and forward. EMDR notes from the therapy that includes rapid eye movement. I knew how it worked. I knew what to do.

I kept some small ringed books with grocery lists and notes on childrearing that I had written as a brand new mother. If your child says “mama,” show delight. My grocery lists were banal: lettuce, meat, bread, onions. I kept that history. Finally, I lit a candle in the closet under the eave. It was a candle one of my children had given me to quell the musty odor after too much rain. It was a pleasant scent with no sweetness in it. I sat in the crawl space and lounged against a stack of chenille bedspreads. I put my hands on the manuscripts of books I had published and some glory reviews. I basked in the comfort of knowing there was nothing in there that I had not illuminated.
Posted by Consuelo Saah Baehr at 4:54 AM 3 comments: Links to this post 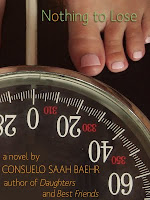 "The evening progressed from phase to phase..."

I went to a party recently that I enjoyed so much it made me re-think everything I ever thought about parties.
I have never been fond of parties. One of my favorite quotes in literature from The Great Gatsby describes a big dinner party: “The evening progressed from phase to phase with the sheer nervous dread of the moment itself.” You got that right.

Parties are a huge leap of faith that you belong to the right social group and have learned the rules. Generosity is at the core of any successful party. You can’t run out of booze or food unless it’s the wedding feast at Cana and you have Jesus as a guest. Ideally, a good party should include several guests who are more accomplished and wealthier than you and will make your regular guests feel it was worth getting a sitter. Another nice ingredient is that the party be gay and carefree (sometimes achieved with Cole Porter songs like “You’re the Top.” Who is so beleaguered by life that they won’t smile when they hear these lyrics:
You're the top!
You're Mahatma Gandhi.
You're the top!
You're Napoleon Brandy.
You're the purple light
Of a summer night in Spain,
You're the National Gallery
You're Garbo's salary,
You're cellophane.

There are scary aspects to parties:
1. you won’t know anyone.
2. no one will initiate a conversation with you.
3. when you infiltrate a conversational huddle, the people will stop talking and rush to get a drink.

Suppose the worst scenario takes place and you are literally alone in the center of the room visible from every corner for all the other guests to look at and ridicule. This is the time to apply the “so what?” cure. So what? What is going to happen? Your limbs won’t begin to fall off as if you were a leper at Kalaupapa. Eventually everyone will go to the next phase and the evening will progress as per Mr. Fitzgerald's forecast.

Getting back to the wonderful party that I attended recently, I have to report on the ingredient that took it out of the realm of good evening with friends and acquaintances and catapulted it into the realm of temporary amnesia gleefulness. WE PLAYED CHARADES. When you play charades with a group of smart, accomplished people who are either younger and cooler than you or same age but super smart, you become as alert as an astronaut at lift off. You forget who you are, where you live, your debts, your weight, your plumbing problems, your chronic ill functioning sinuses. You become hyper focused on solving the clues. You scream out possible answers and jump up like a lunatic. If by some miracle you guess the charade, your pituitary gland shoots something, maybe growth hormone, into your system like a fire hydrant in the ghetto. We had teams and my team won two of the three rounds. It was a great party.
Posted by Consuelo Saah Baehr at 10:18 AM No comments: Links to this post

In May I sold 2301 e-books combining the U.S. and the U.K. I am wide-eyed and astonished at this number especially since my books fall into genres that are tepid at best. The really hot genres that tax the servers at Amazon are paranormal romances and the high priestess of these books is a young woman named Amanda Hocking. Amanda self-published a paranormal series with the name “My Blood Approves” (see current ranking above) that made her a million dollars and ultimately brought her to the attention of the big publishing houses and a movie contract.

“My Blood Approves” are words that pop into my mind at odd times and wiggle around until I pay attention. It's not easy to write a book that sells a zillion copies and yes, I wish I had the kind of imagination that resides in Ms. Hocking. The title is both provocative (where are we going with this?) and homely (the old meaning of homely). Using the deductive approach it would mean my blood is happy to be slurped. The dialogue would go like this. A vampire is coming tonight and he will sink his fangs into your neck and siphon off some of your blood. And the response is” “Okay, bring him on. I checked and my blood approves.”

It could mean “blood” in the sense of ancestry, bloodline, etc. My entire bloodline approves of my fetish. Grammy and Poppy and Uncle Ned like the way I turned out and when I tell them that my teenage boyfriend comes into my bedroom at night and attacks me like a Cheetah or some apex predator at the top of the food-chain tucking into a fresh kill,” they say, “Darling girl, we approve.”

I’m not making fun of it. No one achieves that kind of success without a lot of hard work and a million dollars is nothing to laugh at. This is the story a lot of readers want on their Kindle. Irony and turn of phrase aren’t cutting it on the e-book bestseller lists.

I should get on my knees and thank somebody that while all this paranormal excitement is going on in e-books, 2301 readers bought my old fashioned books where regular people lose jobs, lose weight, find love, find themselves, kiss the regular way and experience the normal excitement of solving some of life’s problems. Thank you to all.
Posted by Consuelo Saah Baehr at 2:51 PM 1 comment: Links to this post