This morning I woke up in my 120 square foot master bedroom on my non-pillow topped Serta under my 250 thread count sheets with a ‘low fill power ‘ comforter.  I’ve watched enough HGTV to know that even first time homeowners barely out of their teens who have been living in her parents’ basement to save for a down payment demand a grand Master Bedroom with an en suite bathroom. My bathroom is not en suite (there’s barely a room and definitely not a suite).  My bathroom, at best, could be described as a Jack and Jill.  That means it’s meant to serve two bedrooms inhabited by  a boy and a girl whose parents named them Jack and Jill when those names were still usable. Even though there is no “master” in my house, I’m thinking I’ve settled and why didn’t I notice this before?

I made a list of the places I’ve lived and searched for the wrong turn I might have taken.
1. Three boarding schools.
2. Three  studio apartments in New York City steps from glam Fifth Avenue.
3. Newly married I was “at home” at the north end of Park Avenue.
4. As a new mother I nursed my newborn in the chauffeur’s cottage in shadowy, secretive estate-choked Mill Neck, L.I.
5. As a middle-aged mother I yelled at my children in Lattingtown Harbor, L.I. within the old gated estate of J. P. Morgan’s lawyer, Mr. Guthrie.
6. Presently, I live in the village of East Hampton, N.Y. one and a half miles from the Atlantic Ocean and sleep in the smallest bedroom I’ve ever had. 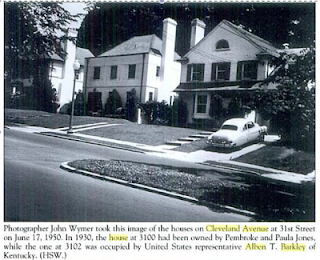 The most interesting house I lived in was at 3102 Cleveland Avenue, Washington, D.C. and had previously belonged to Truman’s V.P. Alben Barkley.  The Barkleys left a lot of government memorabilia in the basement that could probably make me a millionaire today but I think my Uncle Charlie threw it away.  Barkley died while giving a speech at Washington & Lee Univ. “I would rather be a servant in the house of the Lord than sit on the seats of the mighty,” he said and then collapsed.  I’m like Alben.  I have the residential mind-set of a peasant. I don’t want to sit in the seats of the mighty either.  Tracing the past shows me that I am most likely to choose a humble repair-needy dwelling in a great zip code.

Recently I did some house refurbishing.  I painted the living room a medium gray and it looks sophisticated in a “An unexpected color can transform a summer cottage” way. I painted the outside soffits and fascias and trim and got new storm windows and new leaders and gutters.  It all looks as good as it will ever look unless I tear the house down and start anew.   Since I cut down the overbearing tree in the backyard, the sunlight streams in throughout the day but especially around three o’clock.  It is a cheerful, welcoming light that leaves nothing in shadow.   With the tree gone I will be able to have a vegetable garden for the first time in my life.  I could sleep in any room in the house.  I could make the living room my bedroom if I wanted.  I could sleep in a bedroom that occupies the entire gabled attic floor.  With the tree gone and my house all spiffed up and much of my stuff given away or thrown away, let’s see how I do in 2013.  I will probably own this house for the rest of my life.  It’s a good house with big fat water filled radiators that give off a mellow heat.  I can dry my clothes on them and sit on them when I come in from the cold.   I can walk to everything in the village and the railroad is a block away.  There’s a studio cottage in back that I occasionally rent out for the night or sleep in when my kids come to visit.  There’s a garage filled with all the stuff I took out of the basement.  (For some reason, the empty basement gives me confidence.)  This spring I will plant my  vegetable garden. I'll start turning over the soil as soon as the ground is soft.  Whatever psychological map led me to this house, it feels okay.