(Haven't done Sample Sunday for many weeks but today I decided to showcase the novel that's close to my heart.  Reviewers said it made them laugh out loud) 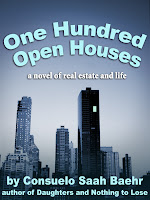 It’s tax season and I’ll get to visit the senior center again.  Last year I spent four hours getting my taxes done at the senior center. My regular tax preparer had gone to rehab without telling anyone.   Once I heard that the senior center did taxes for free and did them immediately, I headed there without a qualm.   The preparer assigned to me had once been the chief financial officer of a multinational conglomerate.  He now helps comatose seniors to sort out their tax returns.  Why does the government bother these people?   Leave them alone. They’ve done enough for you.
While we were all waiting for our turn, there was inter-taxpayer conversation.  One tall man who had the exaggerated gait of cowboy said:  “They raised the property taxes big time but I see the supervisor gave himself a nice raise.”  The full figured woman across from him who had on a green nylon warm-up jacket with the New York Yankees’ logo on the back, said,  “Yes. Uh huh.  That’s the way it goes.”
I went to get a cup of coffee in the senior center dining room and there was a worker handing out bagels. The room had the institutional cleaning smell of my old boarding school refectory.  I put my hand out and she gave me one of the bagels.    This place was probably in my future so I looked around and it was one continuous surprise.  They offer a lot of free stuff and free services.  Free yoga to begin with and then free transportation and free home repairs.  Free food, too, or hot meals delivered for a couple of dollars. The only deficiency I could see was the excess of laminated plastic in the décor.
I had my coffee and bagel to nibble on and I got to listen to all the seniors bitching about this and that.  It was pleasant. A new arrival, a man, came in and said he could not find tax forms anywhere.  “Mind if I sit here,” he asked the woman with the Yankee jacket.
“Be my guest,” she said.
He told her he had been to the library for forms and they were all out and the library sent him to the post office and they were all out.
“Yes.  Uh huh.  That’s the way it goes,” she said.  I thought, this woman knows how to attract men.  She just says ‘yes, uh huh, and that’s the way it goes’.  Maybe I should try that instead of talking so much.  The other thing I realized about senior life was that you could make continuous conversation about what had just happened to you that day and it was okay.  You didn’t have to be witty or ironic.  In fact, it was preferable to be a little dull. You could just barge in and talk as if you had known these people your entire life.  It was also okay to whine because the seniors considered themselves a unit of solidarity and were not judgmental about each other.
Imagine being able to whine to your heart’s content?  Everybody whines.  Winston Churchill whined.   Just read the letters to his mother during the Boer War. “Can’t make sense of the foxholes, my clothes are damp…”. The only person I can’t remember whining was Mary, Jesus’ mother.  The only time I remember her saying anything was when Jesus’ stayed behind on some trip.  I think she said, “Why did you do that?” which is almost exactly what I would have said.
So this was senior life and it was not unpleasant.  You could spend the entire day at the center and participate in many activities. From what I could see, you didn’t even have to be a senior.  There were people in their forties having taxes done and doing yoga. I wanted to tell my friend, Delores all about this bonanza so she wouldn’t be so harsh on the government. She called our former president an inchoate mass of deception.  “Look, Delores.  Look at all the free stuff the government is going to give you. You think they want to take everything away but it’s not true.”  They even have a Sunshine Club although I don’t think I would join that.
If Delores went to Capitol Hill and they did everything she asked them to do and she was suddenly living in a country that carried out her ideals to the letter, including making animals more important than people, I don’t think she could adjust.