Sample Sunday: "We love the desert life because it is ours." Excerpt from Daughters 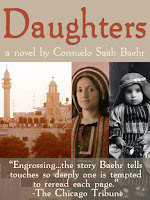