I strive to get my news from many outlets and by that I mean standing in line at the supermarket and reading the tabloids. What I love more than anything is when they give me a drama that has so many potentially explosive repercussions that I have to step to the side and let the person in back of me go ahead.  (What? They make up stuff?)  That’s what I thought until John Edwards.  Besides, in the case of the Anglo/Dane/Yank selfie we have PICTURES.  And by the way was David Cameron acting as the beard?  And it’s not just the selfie.  The National Inquirer has more pictures and although you won’t believe it one of them is of the President kissing - yes, kissing, the Danish Prime Minister Helle Thorning-Schmidt.  (All right it was a greeting kiss.)

The headline writers had a field day Flirting with Dane-ger!  You’re going to get Helle from Michelle.

You know what’s strange?  We’ve become so enamored of the dazzling hook-up - good golly Miss Molly -two good-looking heads of state shamelessly flirting for our viewing pleasure. This hook up is so novelistically right that we DON’T CARE if it’s the Prez and his wife is sitting right there witnessing it. Am I seeing what I think I’m seeing? AND AT NELSON MANDELA’S MEMORIAL SERVICE!!!  It doesn’t get any better.  Who cares about unemployment and the economy when we have this vignette to contemplate.

Anybody who saw Michelle’s scowl and bought the spin that her expression was photographed at another event or she was reacting to something else is delusional. I’ve seen Michelle show displeasure. She tends to roll her eyes as if to say, “Can you believe I’m being subjected to this crap?” as she did during lunch after the 2012 inauguration.  Everyone denied that she was rolling her eyes at John Boehner who was seated next to her.  Anyway, Michelle’s expression almost corroborates that something unusual was going down.

Here’s the story in pictures.
Barak is carousing with Helle - Michelle is not amused 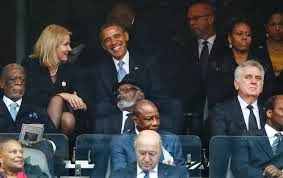 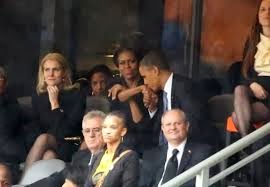 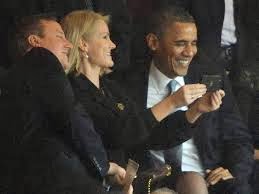 Michelle strikes back by putting her hand on Bill Clinton’s knee. 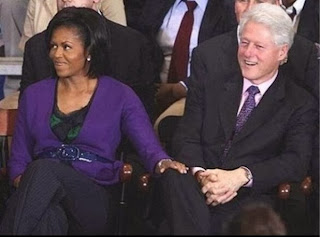 Is this any way to run a country?
Yes. Yes, it is.

Now I’m going to tell you something serious.  You know Charles Krauthammer?  He’s the political commentator and although he comments for Fox News (What? You know it as Devil News?) he also has a column in the Washington Post, has won the Pulitzer Prize, has been a presidential speech writer and was once a Democrat.  Although most of the viewing public was not aware of it (myself included), he is partially paralyzed and uses a wheelchair.

Krauthammer stated this about Barak Obama recently and I believe it is a brilliant and astonishing observation.  Whatever scandal afflicts the White House - IRS targeting, citizens’ phone tapping, Benghazi, the billions given to and lost by Solyndra, the untruths about the Affordable Care Act, the un-kept promises about transparency, banishing lobbyists, closing Guantanamo, the increasing use of executive privilege for passing legislation, the stealthy way the Affordable Care Act was passed in the first place, none of it - NONE OF IT - is ever fundamentally ATTACHED to the smart, ironic, well-built Harvard dude known as Barak Obama. He can do anything he wants and we are almost embarrassed to call him on it.  His trust numbers are down.  His performance numbers are down.  But his popularity is not down.

Fox News can run a continuous loop 24/7 of Obama saying “If you like your health plan you can keep your health plan” (this won the “Lie of the year” award from PolitiFact) but in our mind’s eye he is not a Nixonian liar with a five o’clock shadow, he is the smiling hottie ordering a burger with his posse at the local joint and nobody cares about consequences? Is it any wonder the Republicans are so stressed?  The president has the kind of charisma that is so mesmerizing - we are in a trance. And gosh darn it, as Stuart Smiley used to say, people like him.

He has us in his thrall.

Disclaimer:  Naturally, this scenario comes out of my own highly inventive head and I cannot confirm that it actually happened.
Posted by Consuelo Saah Baehr at 6:51 AM