I was obsessively interested in the royal birth.  When I woke up and saw that Kate was in labor, I went berserk and didn’t turn off the television the entire day. Now here’s the “individual craziness” part.  I didn't care about the sex of the baby or even seeing the baby.  I wanted labor minutiae :   the first pangs, what Kate was doing, did the water break at home, how far apart were the contractions when she said, “Let’s go Wills.  It’s coming.” 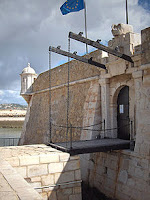 Let’s consider the whole effacing/dilation thing - that is one weird body maneuver. I liken it to opening a rusty unused drawbridge by turning a big creaky crank except a drawbridge doesn’t have pain receptors.  Just for this one time the body steps outside the realm of reality to do something weird:  it changes dimensions and lets the cargo out.

The language of labor is all Middle Ages and Merlinish, measurements are in centimeters.  Without any calipers in sight any passerby seems to know to the nth how far the drawbridge has opened.  The cleaning lady comes in and takes a look.  “Only three centimeters, dearie.  You’ve got a ways.” Think about what nature is asking you to do.  Who in their right mind would think it was possible to get an eight and a half pound baby out of a slim woman’s body without damaging the heck out of her.  That’s when they created the word “asunder.”   And then there’s the placenta - you grow a complicated Rube Goldberg looking thing as well as a complete perfect baby.

Now let’s get to Kate.  I can’t imagine Kate in the throes of labor. How would she manage? Kate went to the hospital around six a.m so she must have been up earlier and realized what was happening before she woke William. She got dressed and gathered her things to take with her.  Maybe she called her mother.  Both Kate and William speak in those clipped and rushed upper-class almost unintelligible accents so it’s hard to “hear” any coherent dialogue.

I worried that Kate would not deliver without complications.  Let’s not forget that the queen's gynecologist plus two others were in the room.  She might as well have had the Bishop of Canterbury delivering the baby. How could anything natural happen in that room?  How could she abandon herself to all the screams and wtf’s ?  When they said on the news “she delivered vaginally,” I almost fell with relief.  I was surprised they even know that word in England.

I like Kate.  She worked hard to get William.  As it turns out with that wacky family (except for the Queen who is darn near perfect) they should be thrilled to have her because she definitely knows what she is doing.  With Kate, very little happens by chance.

Now that she has crossed over to the side of women who have had a child, Kate will change.  Her perspective will change.  LOOK at what happened to Snookie who has become exemplary and full of self control after giving birth to Lorenzo.  Snookie said,  “I’m different now.” It’s not that she cleaned up her act.  She has an entirely new act.  She went in a whole different direction.  Women change when they’ve had a child.  And I’m not talking about ppd.  I’m talking about a certain almost grim confidence.  They’ve been to a strange place and things will never be the same again.

P.S.  For my devotion, I was treated late last night to a biopic of Kate.  She was bullied as a child and attended boarding school.  Wow, Kate.  Think of what those bullies are saying now!
Posted by Consuelo Saah Baehr at 5:56 AM