In the honeymoon period of e-publishing, I was completely in its thrall. After decades of cowering under trad pub snobbishness, crushing rejections, marketing laziness and worst of all taking a year or more to publish a book, writers got a fairy godfather in the form of Jeff Bezos (Amazon) who offered a fabulous alternative.

Jeff Bezos turned the ether into the best bookstore in the world and this bookstore didn’t yank your books after two weeks or put them on a high shelf.  This bookstore kept your books on display for as long as you wanted.  Jeff Bezos said: “Here, this is for all of you writers.  It’s free.  It’s inclusive.  It’s global. I’ll sell your books for a tiny fraction of what the big six charge and you get to control everything. Instead of getting paltry royalties twice a year and never earning out your advances, you can set your book price, put your book on sale, change your cover, tweak your blurbs and experiment with marketing.  And you can do any of this in a matter of minutes.  You can track your sales 24/7. Instead of rejection notes, we send congratulatory e-mails.  Is there any writer out there who doesn’t see this as a miracle?

Fast forward to 2013.  The e-book business is still the best marketplace however the landscape has changed, In the old days (2009-2011) a price of 0.99 was a sure way to drive sales and you could count on volume to justify the low price.  When that ploy glutted the market and dimmed as a marketing tool, the “free” maneuver came to the rescue.  If you let your book go free for a couple of days and got enough sites to mention the free book, a gush of sales followed when the book went back to ‘paid’.  It had to do with something called algorithms that enhanced your book’s visibility.  (Sales are all about visibility.)  Free downloads became so popular that actual sales slowed. Free wasn’t working as well.  Newly re-configured algorithms reduced the book’s visibility. In the last half of 2012 sales sank for many e-books.  In early 2013, I went to my favorite forum, The Writer’s Cafe, and noticed several people were asking about advertising and seeking reliable sites for their ad dollars.

I am, by nature, frugal.  The idea of paying for advertising took some mental adjustment but when I saw several books shoot up in the rankings after an ad on BookBub, I decided to give it a go even though it could cost hundreds of dollars that I might not earn back.   BookBub has an editorial review board that sometimes turns down requests for advertising.  They check out your oeuvre on Amazon, reviews, etc. to see if the title will fit their model for a successful run.  They want you to earn out the cost of the ad.

My first ad with BookBub was for Nothing To Lose.   I had asked to advertise 100 Open Houses but they “advised” me to choose something else. The editors at BookBub placed NTL in the Women’s Fiction category and charged me  $130 (currently $180.)  I was so pleased with the results of this ad I scheduled another for last Sunday.  This ad was for Daughters and it cost $280. 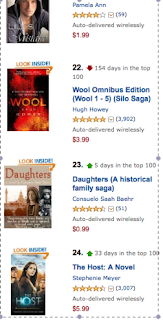 The first ad was very successful selling almost 1800 books and sending NTL up the ranks to #134 (from about a million books.) I had made back my money three hours in.  The second promotion was even more successful selling over 4100 units and placing Daughters as high as #23 in the Kindle 100 and as high as #10 in the Nook 100.  Both books went to #1 or #2 in their genre category and with Daughters, my rank as most popular author rose to #62. Again I made back my money before the day was half done. Most of these lofty rankings begin to slide after a day or two but sales linger.

In the future, ads might fade as a sure-fire way to produce sales or ad prices may become prohibitive. Something else will come along.  I could just do nothing and be satisfied with reduced sales.  The important lesson is that when necessary, I know how to put on my big girl shoes and take care of business. I am finally a grown up.
Posted by Consuelo Saah Baehr at 1:50 PM