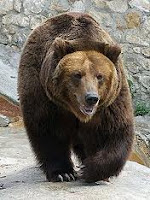 A mother bear and her three cubs broke into a Norwegian cabin drank 100 beers, ate all the food and knocked over a wall.  “They had a hell of a party in there,” said the owner.
Why wasn’t Goldilocks ever booked for breaking and entering?

"I have looked at these things about as long as I can look at them, and I'm ready to blow this joint." Darlene Cates, who once appeared on the Sally Jesse Raphael show, “Too Heavy to Leave the House,” and landed the role of Leonardo DiCaprio’s mother in What’s Eating Gilbert Grape, recently lost 244 pounds (nearly half her size) and hopes to be able to leave her bedroom and attend her grandson’s confirmation in October.  I know what you mean, Darlene.  I’ve looked at all the stuff in my house about as long as I can, too.

God is so good

“I met Taylor Swift with my absolute best friends like we said we would do one day. We saw her with her new boyfriend. We told her how happy we were for her and she had the biggest smile on her face. God is so good." A fan who bumped into Taylor Swift and her new boyfriend Conor in Nashville.  Yes, God is good.  God is also mysterious.
Posted by Consuelo Saah Baehr at 6:41 AM