Would you give up a rent-controlled fireplace studio in Manhattan for a guy?

(In between re-writes of my new novel, Fortune's Daughters,  I took a fun break to review The Dollhouse, placed in my hands by Penguin/Random House.  PUb date 8/23/16) 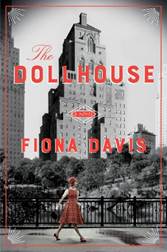 During a week of ninety plus heat in East Hampton I liked having The Dollhouse, a summer read, to keep my mind cool and engaged. The Barbizon Hotel (The Dollhouse) was THE place where proper young women from small towns sought shelter when they arrived in New York City.  Liza Minnelli, Ali MacGraw, Grace Kelly Lauren Bcall were among the many aspiring actresses who stayed there. Future writers Eudora Welty, Joan Didion, Ann Beattie, Mona Simpson—and Sylvia Plath, who set part of The Bell Jar at a fictional Barbizon were residents.

It gets better.  It’s 2016 and thirtysomething Rose Lewin,  think The Devil Wears Prada, is a smart likeable woman who has been done wrong by a callous boyfriend and a callous television news station. Her new job at a trendy content factory is in jeopardy. Rose gave up a perfect, rent-controlled fireplace laden studio for the creep and now must scrounge around for shelter in pricey New York while he places his ex-wife in their luxe Barbizon condo. This fact alone made me want to kill the duplicitous boyfriend. With career and real estate demons nipping at her heels, Rose has one tiny safety net – a story idea about the old days at the Barbizon and the women from the era who still live there, segregated in musty apartments while the rest of the building is a basket of luxe trophy pads.

The novel alternates the present and the past, as Rose pursues her story to unearth the details of the tragic accident that befell Darby, an Ohioan who arrived at the Barbizon to attend Katherine Gibbs Secretarial School and fulfill her dream of being the best secretary in the world to an important man.Will the mystery of Darby's life be revealed?  Will Rose stop being a victim and take control of her life?  Will her partner, the hunky photog, stick around when all else crumbles?  Will the ambitious ex boyfriend get what's coming to him?

If you liked the era of Mad Men and if you were rooting for the heroine of The Devil Wears Prada, The Dollhouse will satisfy if you can do without much emotional depth.Good twists and surprises.
Posted by Consuelo Saah Baehr at 9:34 AM