(This is a repost for Mother's Day)

It was not a joyful reunion but we did the best we could and I transported her to New York to the seventh floor of the Terrance Cardinal Cooke Health and Rehabilitation Center on Fifth Avenue and 105th Street. Her room overlooked the wrought iron gates to Central Park’s formal English Garden, a favorite wedding locale for Asian couples.  In that room, I learned more about my mother than I had up to that time.
I learned that my mother, still in her twenties and freshly divorced, had started a business importing dresses and other things from Montgomery Ward and selling them to the women in her village.  She had run a dressmaking shop, a beauty salon, a boarding house, she called it a hotel. When the war made importing goods impossible, she traveled to the U.S. by bus through Texas, made her way to San Francisco where she worked in a Lucky Strike factory putting the official stamp on packs of cigarettes. 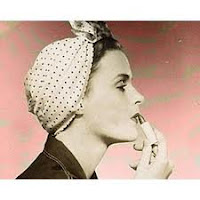 She was a woman who placed all importance on dressing well and looking good. She would apply and re-apply lipstick throughout the day.  She drew in her eyebrows. When I told her that her nephew was dating a girl and that she dressed very well, she said, “That’s all I want to know.”
Here’s the dialogue.
“Your nephew is dating a girl.
“Oh, yes? What’s her nationality?”
”She’s Armenian.”
“Very clean.  An Armenian woman lived next door to me. She was very clean. Tell me, does she dress well?”
“As a matter of fact, she does.”
“That’s all I want to know.  I like that girl.”
“Really, that’s all you care about?”  In the dreamy Fellini atmosphere of the high ceilinged room, the kind of room you would see in an old war movie where the soldiers convalesced and got used to their injuries, whatever she said had more weight.  Maybe how a person dressed said everything about that person but I wanted to take it further.  “That’s all you care about? How she dresses?” I didn’t even raise my voice for this but remained matter of fact.
“More or less.”  My mother answered most questions with “more or less.”
Did you like the ham?  More or less.  Didn’t you think that show was terrible?  More or less. She wasn’t trying for a conversational style. She was a straight shooter. If irony is for ironists.  My mother was an anemianist. I altered my personality in her presence and was a straight shooter, too.
“Yeah, you’re right.  She dresses well.  That’s all we have to know.”  As a matter of fact the potential girlfriend not only dressed very well but she put on makeup in the morning before showing up for breakfast. I go days without makeup and dress erratically.  No wonder my mother thinks she got gypped.
My mother was 88 and could no longer hold an idea in her head for more than five seconds.  One day she asked me fourteen times if her granddaughter was coming to see her for mother’s day.
“She’s in California.“
“Still in California?”
“Yes.”
“Is she coming for mother’s day?”
“No, Mom. She’s still in California and she can’t make the trip.”
“Is it the boyfriend?”
“No she has a job.”
“Is she coming for mother’s day?”
“No. She’s in California.”
You might think this drove me crazy but it didn’t. Sometimes my voice got sharp and I thought, how can I kill her, but then I’d take a breath and look around that Felliniesque room and hang in for the long haul.
“Is she coming?
“No, mom. She’s in California.”
I got a little thrill using the word “mom.”  It implied a normal sunny childhood.
Just when I was certain this was the last lucid conversation we would ever have, she said, “They came yesterday to see if I was crazy.  They asked me who the president was.  I said the new Bush. I forget his first name.  I never liked the old Bush.  They asked who is the one before that?  I said. Cleenton.  William Jefferson Cleenton.  By the way,” she said, “you have to buy me chooz?” She still has her Spanish accent although she would be horrified to be told this.
“You’ve got shoes.”
“I can’t wear those chooz.  It came with a paper that says don’t wear for more than two hours. I’m not going to wear cheep chooz that say you can’t wear them for more than two hours. That’s ridiculous.”
“They mean don’t wear them too long the first day.”
“No, my dear. These are cheep chooz.  I never heard of such a thing.”
“So don’t wear them.”
“Will you buy me chooz?  Anything.”
“Ok.”
“I can’t understand why your daughter moved to California.  Her family is here.  You have to stay with your family.”
Really!
What emotions come to mind with mothers? Everyone thinks it’s just love but there’s fear, too. Think about it.  There is fear, too.
Posted by Consuelo Saah Baehr at 10:10 AM