An obsessive loner we accept and love

(Once again Penguin Publishers has sent me several books to review and I chose Waiting For Wednesday (a Frieda Klein Mystery), the sequel to Tuesday's Gone.  I like this  series by Nicci French because of the obsessive loner, Frieda Klein.)

In the previous Frieda Klein Mystery, we had left Frieda nearly dead and still persona non grata with the police department despite her success in solving their high profile murders. I was expecting Frieda to get some kudos, more face time with her lover and perhaps a big spiritual vacuum to suck out some of the guilt she felt for the tainted results of her crime solving.  Not to be.  Not only is Frieda limping and still weak from her injuries but humiliation is heaped on her by pompous police big wigs and horrid impositions perpetrated by people she hardly knows.  And a crazed homicidal maniac taunts her with bouquets.  Frieda cannot even bathe because Josef (the angel handyman) has decided to replace her cheap tub.  Despite the chaos and public humiliations, Frieda only hears the song of her own psyche and remains the obsessive we know and love.
This is a psychological thriller full of loners on seemingly pointless missions who have lost in the game of love.
The sun comes out infrequently, people forget to eat, many are in need of a wash. There is constant smoking and drinking.  Someone is always making tea. There is no laughter.  None.  No matter how many threads in the story and no matter how complicated the threads and unlikely the twists, I was compelled to read continuously until the end.  That’s all one can ask of a book. 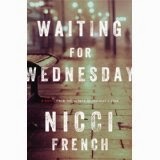 Posted by Consuelo Saah Baehr at 5:07 AM