The "AHA" use for what you already have.

Remember George Forman?  He was a boxer who made a comeback at forty-five and named all of his many children George. In 1994 he started selling the George Forman Grill - the mean lean grilling machine.  We all bought one.  We were astounded at the sense of it.  Then we were less astounded and put it on a high shelf. I don’t know why we do that.

The G. F. Grill was meant for grilling meats (mainly hamburgers) and it sloped downward so the fat from the meat could trickle out, leaving you with a nice lean burger and an oily mess on the counter. 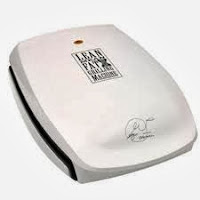 One day recently I wanted a panini very badly. For some reason any simple sandwich tastes better if you smush it so all the stuffings melt and blend together.  It helps if you call it a fun name - panini.  I thought about the mechanics of steam rolling that sucker. You need something heavy and hot that makes the bread toasty and the ingredients (should always include good cheese) begin to ooze out.   There are lots of things that can qualify.   A frying pan with a foil wrapped brick, a foil wrapped weight of any sort - heck you could foil wrap the cat and plop it on top of that sandwich. (Kidding.)  I looked in the cupboard and hauled out the dusty old Forman grill heated it to high and put the sandwich inside.  There was a big gap between the jaws but as the sandwich gave in to its fate, the gap lessened and a beautiful panini resulted.  I left the G. F. grill on the counter because I wanted to eat paninis three times a day.  When I wanted a vegetable panini, I grilled the zucchini or peppers in the G.F. grill before assembling the sandwich.  This was great for eggplant that usually needed a lot of oil to cook in a regular skillet.

One morning I made some pancake batter but right in the middle of readying the pan I wished for waffles instead. Waffles are always airy and crisp whereas getting fluffy pancakes is difficult.  I poured a little of the batter into the G. F. grill.
The grill slopes down so a few drops of batter dribbled out before it set (easily remedied).  In about a minute and a half, I got a waffle. It had ridges and tunnels instead of squares but it tasted light and airy.

Real Simple magazine would call these “aha” uses because you’re going to scream “AHA!” when you think of it.  I certainly did.  If you have any “aha” ideas, please send them to me.
Posted by Consuelo Saah Baehr at 11:31 AM