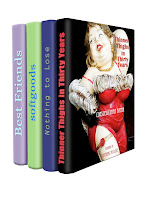 When I put out a boxed set of four titles, I thought I could just make a file with one book following the other separated by page breaks.  It seemed logical. I looked in the mirror and said: You are one smart cookie.  I announced this new project to my local group, The Indie Chicks, and the chicks weighed in with opinions and suggestions.   After about half an hour which is the time frame needed for hurtful truths to seep into my brain, I realized that I was a naive and ignorant slut.  A "boxed set" was not just an e-book with several titles.

The Slow Awakening
The first suggestion from an Indie Chick :  Don't name it "Boxed Set," stupid,  because it will get buried in all the other boxed sets. Call it Consuelo Saah Baehr's Boxed Set or something else.

The third suggestion:  If you provide cover pictures of each book, you had better compress the image.  If your file is too big, you will get a bunch of one-star reviews from customers with cheap e-readers who can't access the entire file and will start cursing you and your stupid books.   I've attached a whole slew of crappy one-star reviews for you to read in case you think I'm being overly cautious. You do know how to insert and compress a picture in a doc file, don't you?  Huh?

The fourth suggestion:  If you provide a Table of Contents - and if you don't you're stupid - your Table of Contents should have hyperlinked titles so readers are able to click on a title and immediately get to the desired place instead of scrolling around and cursing you and your stupid books trying to find it.   In case you think I'm being overly cautious, here are some one-star reviews given for this reason.  You do know how to hyperlink, don't you? Huh?

The Hard Won Outcome - or sometimes Google and U-Tube are not the answer.
Inserting a picture in a word doc turned out to be easy. Use the "insert" prompt and select picture from the menu and then select "from file." This will take you to the list of pictures you have stored on your desktop or elsewhere and you can click on the selection and open.

Compressing a picture - or learning how to compress a picture turned out to be impossible because every version of WORD has different menu options and all of the instructions I found were for versions other than mine.  I could have right-clicked for three years and never seen a menu that offered the simple words "compress file."  Even my own toolbar "Help" option was so vague they might have said: "take two eggs and whip them until frothy" that's how un-helpful it was.  The cover pictures remain uncompressed. I think Calibre, my conversion program, compresses everything when it converts files.  I hope so.

The hyperlinking odyssey.  There are many Google pages of tutorials in hyperlinking and many of them give instructions on how to hyperlink sections in a doc file to the table of contents.   There is not a single tutorial that gives those instructions for my version of Word.  I tried for three days to hunt down a tutorial where I could recognize my particular menu options.  I did trial and error hoping to trick my Word program into doing what I needed.  I never got those lovely underlined blue words that spell hyperlinking success.  Last night, I got out of bed at midnight and tried again to find a way to hyperlink.  My boxed set was live on Amazon and although no one had bought it, there might be a sale at any time.  That poor soul would have a hard time navigating the titles.

At midnight, my google search took me to an Amazon kindle authors forum discussion and right there (God - he called himself Derek) posted a numbered tutorial on how he had achieved Table of Contents hyperlinking success and it perfectly matched my Word menu options.  I tried it, I did it, I achieved the blue underlined words and when clicked they took me to the intended spot.  I uploaded the file to see if it would retain its hyperlinking ability when it got to the Kindle and it did.  As Truman Capote said: "dizzy with happiness is no mere phrase."

One other small triumph:  Recently I uploaded all of my titles on the Kobo platform. Today I went there to see if there were any sales.  For almost a month it has said: 0 sales and $0.00 amount earned.  You are a loser. Today it said 2 sales, $4.18 earned and country of sale is New Zealand.  I love the internet.


Posted by Consuelo Saah Baehr at 7:08 AM